On Monday evening, my culinary book group met again.  These remarkable women make my heart glad.
We’ve seen each other through heartbreak and triumph, dishes that didn’t turn out, books we did and didn’t like, and new dishes we’ll definitely keep on making.
Each month the hostess chooses a culinary-themed book, usually a cookbook.  But we’ve read memoirs, biographies, novels, and even a food issue of a magazine. We all bring a dish from the book or inspired by the book.
First, we sipped wine and told the stories of our family Thanksgiving celebrations.  One intrepid friend fixed dinner—solo—for 37 people, 8 of which were children under the age of 12. Another “rested” by only having to make the turkey, dressing, mashed potatoes, and gravy.
I recounted the tale of our Thanksgiving, when my sister and I deboned a 20-pound turkey using surgical scalpels—they work great, by the way.  We watched two YouTube videos first and then started on the big bird. We ended with a stuffed turkey roll wrapped in prosciutto (turkey porchetta) that kept growing and growing and growing as our Dad tied it up at intervals.  When it reached 3 feet—how could this be??—we looked at the recipe again. And saw that it only called for a 10-pound turkey. 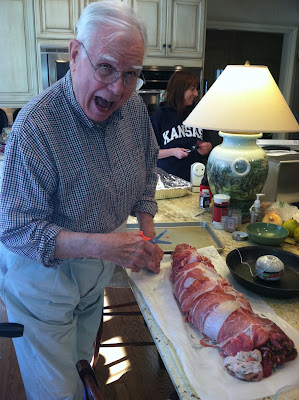 The monster turkey roll wouldn’t fit in the oven, so we ended up cutting it. We grilled half and deep-fried half (after the other two turkeys came out of the outdoor fryer).
Unforgettable!
Now, back to book club.  For this month, we read Lunch in Paris: A Love Story with Recipes by Elizabeth Bard.
She had me at the first sentence: “I slept with my French husband halfway through our first date.” As an American who moved to Paris to be with her love, Bard recounts the little incremental steps by which she moves from being “that American” to being able to read in French and understand the not-so-secret disciplinary code that French women use to stay so thin (don’t eat much and drink a lot of water).
A code my book club decided not to follow—at least for that night.
All of the recipes we tried were delicious. Right before I left the house, I snapped a quick photo of the dish I made, with a little holiday twist. 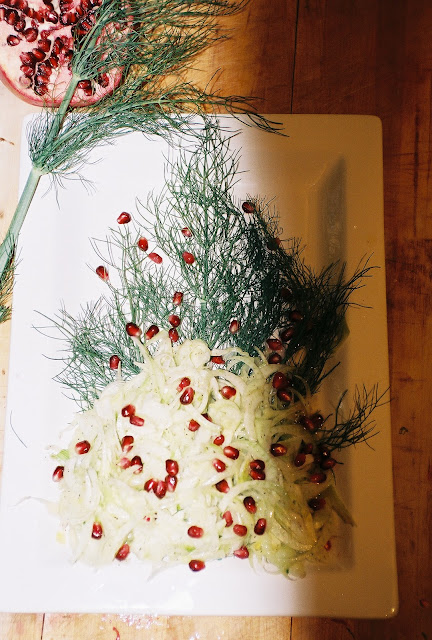 French Christmas Tree Salad
Adapted—with artistic license—from Lunch in Paris: A Love Story with Recipes by Elizabeth Bard.
This refreshing European vegetable salad uses few ingredients and is best made an hour or so before you serve it.  You can use a combination of fennel and fresh celery, if you like. Use a mandoline slicer or a very sharp chef’s knife to trim the root end of each fennel bulb, then trim off the shoots.  Save the feathery fronds to create a Christmas-tree effect on your serving platter. A very little bit of this salad makes a delicious contrast to heavier holiday foods.
To remove the seeds from a pomegranate, try Nigella Lawson’s method, which works great. Cut the pomegranate in half, fill a bowl with water, then whack the skin side of the pomegranate half with a wooden spoon so the seeds fall out and get trapped in the water (instead of going all over your kitchen). Once the first seeds come out, you can pry the rest with your fingers.
Serves 6
2 fennel bulbs, ends and shoots trimmed, and sliced paper thin
The juice of ½ lemon
Extra virgin olive oil
Kosher or sea salt
Freshly ground pepper
½ cup fresh pomegranate seeds
1.  Combine the sliced fennel and lemon juice in a bowl. Toss to blend, then drizzle with olive oil and toss again. Salt and pepper to taste and toss a third time.
2. Arrange the fennel fronds on a white platter in a Christmas tree shape.  Mound the fennel at the base and scatter all with pomegranate seeds. Cover and chill until ready to serve.
Unquenchable. 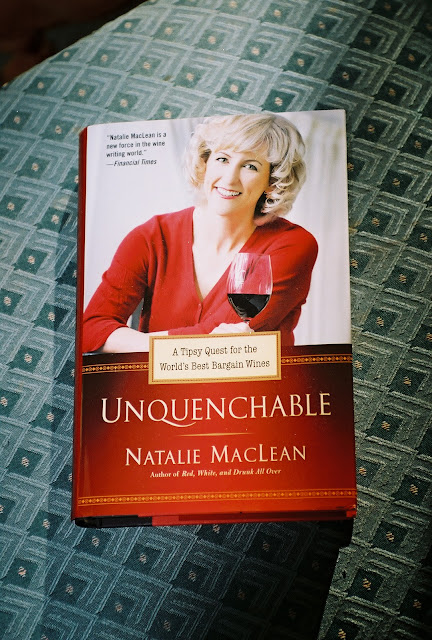 I think my book club pick for 2012 is going to be Natalie Maclean’s Unquenchable: A Tipsy Quest for the World’s Best Bargain Wines.
I love the way she writes about wine in a knowledgeable, but adventurous and light-hearted style. “Behind every bottle is a person and a story,” she says.
After all, many wineries are family-run, and families, as I well know, can somehow create monster turkey rolls at Thanksgiving.
And she holds back on the winespeak. Not so much “aromatizing the esters” as “making great wines at reasonable prices.”
Even her Unquenchable book trailer is fun to watch.
This book, with a bottle or two of her affordable wine picks, would be a great holiday gift.
P.S. Like Natalie, my sister also has a goat story. . . . but that’s for another blog.
Cheers!

How fun! I recently rejoined our Slow Food book club, and we have a very similar format. We're reading 'The Sweet Life in Paris' by David Lebovitz this month.