Fougasse aux Grattons—That’s French for Yum!
What a week! I started out at Lake Austin Spa just outside of Austin, Texas, where I taught culinary classes with Karen Adler.  Just looking at the photos of the spa makes you relax.
Ahhhhhh…  Or is that Ommmmmm?
http://www.lakeaustin.com/
Secondly, Jon Brick of OutsideLines Travel sent me their cool video of Tory Miller, the talented chef at L’Etoile and Graze in Madison, Wisconsin. Miller pulls his iconic red wagon from stall to stall at the Madison Farmer’s Market, then chooses the best of what’s in season for his menus. What an inspired idea to do a smushed (that’s a culinary term) round of goat cheese warmed in the oven, then a salad on top! You can read more about him and the Madison Farmer's Market--the largest in the United States-- in Heartland.

Thirdly, I had a meeting in Kansas City to talk about photos for my upcoming book I Love Cinnamon Rolls! with Andrews McMeel (fall 2012) and a sampling of cinnamon rolls. That's a tough job, but somebody has to do it.
The fabulous Ben Pieper http://www.benpieperphoto.com/ is doing the cinnamon roll photos. He also did the lick-the-page  food photos for Heartland.
Number Four Event of the Week. My son is having a big birthday, which means I’m starting to tell people I got married in my Girl Scout uniform. . . .
We’ve also had our first frost.  And that heralds Bread Baking Season, if you haven’t been baking before now.
I was just at Costco and saw all the bread machines for sale.  That’s right in line with bread books like The Artisan Bread Machine flying out the door.
If you don’t have that electric baking assistant, the automatic bread machine, you can still get a little help.  No-knead dough just stirs together in a bowl, then sits on your kitchen counter to rise all by itself. It does just what you told it to do.  Rise! 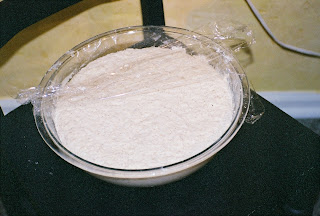 When you marry this easy-to-get-along-with dough with great bacon, well, what’s not to love?
In Fougasse aux Grattons, or French Flatbread with Bacon Bits, you can have a wonderful flatbread to go with soups and stews or an appetizer bread that’s just as delicious with beer and wine.
Fougasse is a dough you roll out like long pizza, then cut slits through it with a pizza wheel or knife. The slits make a decorative pattern as the flatbread bakes. Then, you brush it with bacon fat for even more flavor. 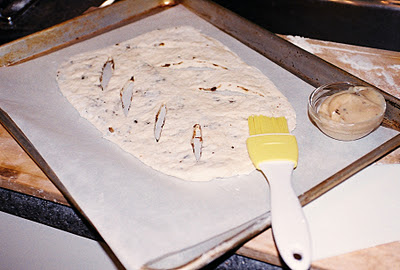 The grattons are little pieces of bacon cooked crisp with dry white wine. You scatter them over the dough, then roll them into it before you cut the slits in the dough. Easy. Use an artisan Midwestern bacon, of course. 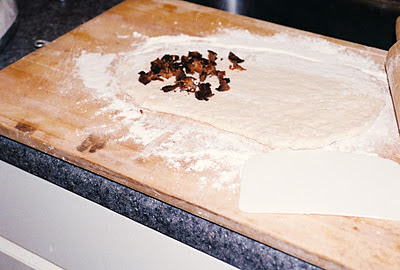 Although you don’t have to use a baking stone to make this recipe, it does make your oven function better. A baking stone's surface gets hot all over to the correct temperature, so anything you place on it bakes evenly.  Even though your oven might say 400°F, there are still hotter and cooler spots. The baking stone evens the baking field, so to speak.
The finished flatbread is crisp on the outside, bacon-y on the inside, and 100% delicious. 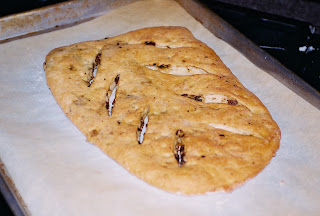