Home-Rendered Deliciousness
For several generations in the Midwest, lard was the go-to fat in the kitchen for flaky pie crusts and fried chicken.
Then, when margarine and vegetable oil started appearing on grocery store shelves in the 50s and 60s, lard was considered bad.
Now, lard is good again.  At least the home-rendered kind made from “leaf” fat, so called because it has a long leaf shape.
Made and kept without preservatives, fresh lard doesn’t have the slightly musky flavor that packaged lard does.  It has about 45% mono-unsaturated fat and no trans-fats. And it still makes the best piecrust and the best fried chicken or potatoes you’ve ever tasted. I also like to use it when I make duck confit in the fall.
To render or melt lard at home, you need to find “leaf” pork fat.  Usually, a full service butcher shop carries it or can get it for you. In the Kansas City area, I found leaf fat at Bichelmeyer Meats
http://bichelmeyermeatskc.com/
They also have leaf lard that they’ve rendered, if you don’t want to make it yourself.
The rendering process is easy, but takes a bit of time.  After you trim and cut the fat into small pieces, 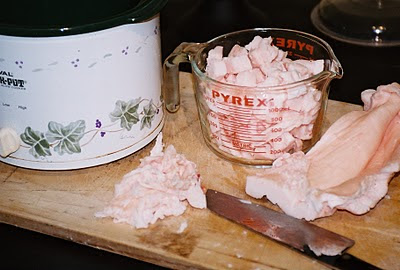 you’ll want to render it slowly so it can be used for both making pastry and frying (if the lard gets too brown, it could make your lard pie crust taste like pork roast). I used the slow cooker, which does the rendering work without too much attention from the cook.
Herb and Cathy Eckhouse of La Quercia
www.laquerciaus.com
in Norwalk, Iowa, render their lard in a 250°F oven. Either way works well.
You’ll end up with a pale golden lard that turns creamy white. Here, you see a jar of home-rendered lard that is cooling--pale gold where it is still warm, white where it has cooled. 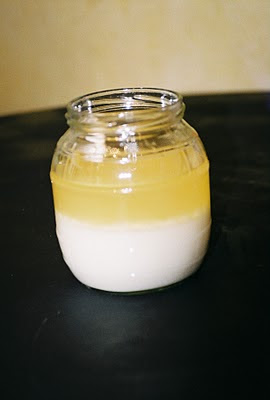 If you like, freeze some of the lard in pre-measured portions, in ice cube trays or freezer bags, to use for pie crust. Use the cracklings in soups, salads, or cornbread—they taste like toasted sesame seeds.
Home Rendered Lard (from Heartland: The Cookbook)
Makes about 3 cups
2 pounds leaf lard in one piece, membrane trimmed away and the fat cut into 1-inch pieces
1. Place the chopped fat in a 2-quart slow cooker and turn it to the Low setting. Cover and render for 8 to 12 hours or until most of the fat has melted.
2. Line a funnel with a coffee filter or cheesecloth and place the funnel in the top of a clean,  wide-mouth quart jar. Ladle the hot fat into the lined funnel until only the small pieces of unrendered fat or cracklings are left in the bottom of the cooker. Set the jar of lard aside to cool at room temperature.
3. Turn the cooker to High and let the cracklings turn medium brown, stirring occasionally. Transfer the cracklings to a plate and let cool.
4. Cover the jar of lard and store in the refrigerator. Keeps indefinitely. Place the cracklings in a storage container in the refrigerator and use within 1 month.