Summer Garden Goodies with a Twist
I spent part of my summer at my sister’s home in the North Carolina mountains. Every few days, we rolled down the mountain to check out what was great at local farmer’s markets. 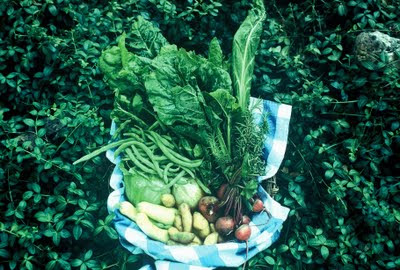 At a market near Asheville, we saw a basket of green beans with a handmade sign that announced “Greasy Shortcuts.”  Huh?
These beans turned out to be an heirloom Appalachian variety (actually, Greasy Cut-Shorts) with a “greasy” or shiny appearance because the bean doesn’t have the down that other green beans do. Greasy Cut-Shorts fell out of favor when stringless varieties of green beans meant less work for the cook.  But we bought them anyway, sat on the porch in the time-honored tradition, and used our paring knives to remove the string from both sides of each bean.
We simmered them with a little chicken stock, a ham hock, an onion, and salt and pepper. In less than an hour, they were tender and so gently “green bean” in flavor that we all fell in love with them.  When you fight for seconds of green beans, that’s something. 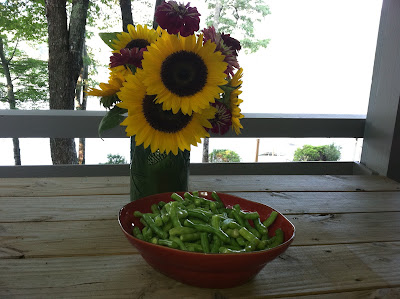 When I looked for information about them, I found this great site that opens up another world of bean gardening: Cornfield (beans that grow up a corn stalk), Cut Shorts (beans so packed in their pods that they look squared off), and Greasy (beans that lack that fuzz or down). Scroll down through the first part of the story to get to the bean varieties.
http://www.heirlooms.org/beans.html
Stuffed Mangoes.  For some reason, people in southwestern Ohio (where I grew up) called green bell peppers “mangoes.” When they served “stuffed mangoes,” it was with a tangy, slaw-like filling in a somewhat wilted green pepper, refreshing on a summer day. You could buy stuffed mangoes at the butcher shop, along with your “city chicken” (cubes of boneless pork and veal on a skewer, to be breaded and shallow-fried.)
When I found the stuffed mango recipe at Lillian’s Cupboard, I thought, “No wonder they were sold at the butcher shop!” They take 2 days to make so the peppers “cure” in the brine.
http://lillianscupboard.wordpress.com/2009/08/24/german-stuffed-mango-green-pepper/
Today, we can grow or find many colors of bell peppers and I like to use a variety of colors for this dish. I prefer to stuff the peppers with cubed, artisan bread, some fresh or canned tomatoes, Kalamata olives, and grated, aged Cheddar.  The peppers can go in the oven or on the indirect side of the grill, just until they look browned on top and the bread has soaked up all the juices.  Enjoy!
Rainbow Stuffed Peppers
Makes 6
6 bell peppers (yellow, red, orange, and purple) cored and seeded
2 cups stale, cubed artisan bread (baguettes, Italian, ciabatta, etc.)
2 cups finely chopped tomatoes, fresh or canned, with their juice
½ cup chopped, pitted Kalamata olives
1 cup grated, aged Cheddar
Olive oil for drizzling
1. Preheat the oven to 400 or prepare an indirect fire in your grill (the fire on one side, no fire on the other).
2. Trim the bottoms of the peppers (without making a hole in the pepper) so they will sit evenly. Place the peppers in an oven-safe baking dish or a disposable aluminum pan for the grill. In a bowl, combine the bread, tomatoes, Kalamata olives, and Cheddar. Drizzle the mixture with a little olive oil and stir to blend until the bread is well moistened. Spoon the stuffing into each pepper. (If you have any left, enjoy it with fresh greens for a salad.)
3. Oven-bake or grill-bake for 30 to 40 minutes, or until the peppers are browned on top.
﻿ ﻿

How do the greasy short-cuts do in the heat? Are they pole beans or bush?
I planted three 8 foot rows of blue lake pole beans. Lovely vines, but no blossoms or beans. I am sure it was the intense heat as I have no tomatoes either, just a few that set early. Wrong varieties and wrong weather. So glad there are farmers that know more than I do.

It was definitely cooler in Asheville--my Pencil Pod Wax beans died in the heat. I've dried some Greasy Cut-Short beans to use for seed next year, so I'll see how they do here. I think they're pole beans.

Very good written article. It will be supportive to anyone who utilizes it, including me. Keep doing what you are doing – can’r wait to read more posts. Lifestyle